Those of us in the gender biz who like to bring every conversation back to equality (yes, that’s me!) have rightly embraced the UN’s HeForShe campaign. While the movement for gender equality was originally conceived as a struggle led only by women for women in recent years men have begun to stand-up in addressing inequalities and discrimination faced by women and girls. HeForShe was created as a solidarity movement for gender equality that brings together one half of humanity in support of the other half of humanity, for the benefit of all.

I say, “hurrah!” We need you men! We cannot possibly achieve equality without your support and advocacy. Plus, many of you are hot, so it’s nice to have you around. (See what I did right there? A little bit of reverse sexism just to keep things interesting). And good one UN Women for coming with this term and organizing around it.

In fact, a great new application of this concept can be found in an excellent IFES report on male allies for women’s equality in Syria.

Yet, as I begin another year of digging into strategies to help women gain more meaningful power over their lives and choices, I still feel more urgency about ensuring that we women are supporting women, not tearing each other down. The interest in male allies is a new and important phenomenon, but let us not lift the pressure to create female solidarity at the same time. Paradigm shifts are not going to happen without this. Men will simply never be as self-interested in helping women as much as women.

I was reminded of this in three ways over the last couple of weeks:

I had a conversation with a newly made friend the other day about what happens when women work together —  just women. The notion was that terrible things ensue! Popular culture would have us picturing cat fights, hair pulling, and high drama when too many women are forced together. Is this really fair? Everyone has their own experience, which I won’t argue against.  But what we forget to consider is that perhaps the lack of desire to work together (or effectiveness at working together) is merely a byproduct of not having equal power. Women utilize what powers we have at our disposal, and sometimes that is the form of negative words and actions, competitions and rivalries to get ahead when we aren’t operating on a level playing field to begin with.

But, why do we want ALL of something, anyway? All female or all male is, literally, missing something. A  workplace, a school, a local city council is more balanced with a diversity of everything – gender, sexual orientation, education, experience, socio-economic backgrounds and so on and so forth.  I don’t want to live on a planet just of women, (insert stereotype or joke here), but I also reject the notion that some character flaw exists in women that prevents them from supporting each other. Let’s flip the conversation by recognizing the ways in which society actively prevents us from supporting each other when we are stopped from attaining equal power in meaningful ways in our lives.

One Turkish organizations that I am honored to work with on women’s leadership actively confronts this by doing sessions about the negative role of gossip among college-age women, which is a particularly viscous tool in the Middle East. I don’t meant to pick on the Middle East. Every country needs to do better by women. But there is an absolute correlation with women having weaker structures and less institutional power in society and the presence of discrimination. There are few political parties, very few women in elected office and conditions that prevent women from organizing politically in much of the Middle East. Take a look at the World Economic Forum’s Global Gender Gap report to see where the Middle East ranks. It ain’t pretty. So the role of gossip in these countries becomes a de facto tool of power.

2. We are a product of an environment that does not see women equally

Let’s bring it back to politics, my favorite topic. Some women don’t consider themselves as being subjected to sexism, personally. Really? Okay, I guess lucky you! You my dear are the one exception! Sorry to break the news, this isn’t how it works.  Gender discrimination is not just an individual experience, but a systemic one that we have to accept is a problem for all women (yes, all women!) before we remedy this. It does not mean that all women are victims, but it means we face something unique by virtue of having a uterus!

If women don’t consider their individual role in a world that is unequal for women, how can a movement be built?  A well-defined problem is half the solution. There’s loads of evidence about the way that sexism and discrimination effects voting patterns, for example. And voting is part of this little thing we call elections, which impacts whose in office, which impacts decision-making structures, which leads to whether policies to address discrimination are promoted so that women have rights and opportunities equal to men. Men comprise 78% of parliaments across the world. No wonder things are not going so smashingly!! Not because men suck, of course they don’t (see HeForShe above), but because of that little called diversity and pluralism.

The problem is two-fold:

(1) women are not running for office in equal number to men in part because party leaders are not nominating them in equal numbers. When more women run, more women win, but we need parties to see the value of female candidates and support them in advance through training, financing, leadership development, and all the activities that lead to winning candidates AND winning parties

(2) when women do run, they face discrimination just because they are women. Women have less access to resources based on their gender (and less developed networks of support), and they are often subjected to sexist media coverage as a way to demean them or remind voters that they are the lesser gender.

We have ways to fight this. Many efforts are underway in the world to support women in politics. But let’s be real, sexism and discrimination toward women has an impact. A new study shows that it’s harder for female candidates to prevail in an election because many people don’t see women as leaders as a result of hidden bias that can emerge in the voting booth. My case study from Ukraine shows how we can overcome that through evidence-based research and campaigns to change attitudes about leadership in advance of elections.

We have smart and well executed strategies to turn this around, so don’t throw up your arms in despair and believe all is lost. Yet, we need more of these, and we need to start by  recognizing that this common thread of discrimination is present in politics and in everyday life in order to motivate people to embrace efforts to change it, together, women and men.

3. History shows, that when women support each other, good things happen. 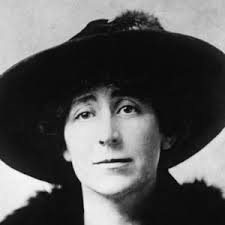 I was back home for the holidays and reminded again of the pioneering kick ass women who fought for women’s rights in the part of the US where I grew up. Jeannette Rankin was the first woman to serve in the U.S. Congress. She helped pass the 19th Amendment, giving all women the right to vote, and was a committed pacifist. She was born in Missoula, Montana in 1880 and died the year I was born, in Kalispell, Montana, in 1973. Yes, Ms. Rankin, I got the baton hand off, we’re all good now. (Oh, if it were only that easy.)

I am proud of the pioneering women from the American West who fought for their voice and importantly, for the the voice of others, because they knew we were stronger, together.

“If I am remembered for no other act, I want to be remembered as the only woman who ever voted to give women the right to vote.”-Jeanette Rankin

I just finished reading Mona Eltahawy’s revealing book, Headscarves and Hymens: Why the Middle East Needs a Sexual Revolution. There are many lessons and observations to orient one to the challenges of the Middle East. But what I am left with is the notion that no matter the country or the context, we are stronger when our voices and hands are raised together. We are emboldened to speak truth to power when we share our common stories and experiences about what it means to be a woman, together. We will have more power to address issues like child marriages, domestic violence, labor force policies, and women’s political participation when we create the conditions for women’s solidarity in spirit and voice. We are STRONGER TOGETHER. But that means we have to actually be together.

So what can YOU do?

This is where the path to solidarity starts, in simple acts of grace and compassion toward our soul sisters in our community and around the world.

May it be a better year for women in 2016 because we want it to be, and our actions follow our desires!